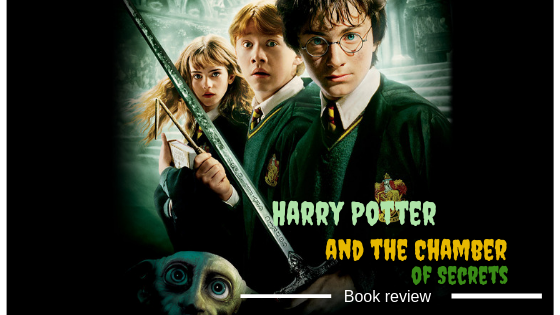 How To See What Posts You Have Liked...

We tend to give...
Read more
Lifestyle

State That Starts With N | The Complete...

How To Do A Poll On Snapchat! Easy...

Snapchat constantly keeps rolling...
Read more
Facebook
Twitter
Pinterest
“It is our choices Harry that show what we truly are,
Far more than our abilities.”
Yes, the choices that we make in our life truly have a great impact .some choices have big consequences and some do not matter at all. When I came across reading books, I think the best choice I ever made in this field was to reading the Harry Potter series.
Harry Potter and the Chamber of Secrets is the second book in the Harry Potter series. if you’ve read the first novel then definitely you’ll go for this one because not only this novels house great literature but also are great providers of fun, adventure, love, learning, thrill, and what not .the whole fun and magical of the novel can’t be expressed in mere 600-700 words unless and until you gather up the courage and actually pick up the series and start from the very beginning.

Premise of The Harry Potter and the Chamber of Secrets

The plot follows Harry’s second year at Hogwarts School of Witchcraft and Wizardry, during which a series of messages on the walls of the school’s corridors warns that the “Chamber of Secrets” has been opened and that the “heir of Slytherin” would kill all pupils who do not come from all-magical families. These threats are found after attacks that leave residents of the school petrified. Throughout the year, Harry and his friends Ron and Hermione investigate the attacks.

Summary of The Harry Potter and the Chamber of Secrets

1.At At the beginning of the story when Harry and Ron fly the car to Hogwarts, they are not allowed to attend the feast and McGonagall magicked sandwiches out of thin air.
However, it is clearly stated in the later books of the series that food can’t be magicked.
2.When the traveling by floo powder goes wrong and Harry enters into Borgin and Burke’s, Draco and Lucius Malfoy enter the shop and Draco is talking about Harry at that time .this seems a bit too obvious and monotonous.

Conclusion:-MY VIEWS ON THE STORY

I think this book is worth reading and the plot and characters are just fantastic. The way Rowling portrays the characters is amazing and one can actually feel magic in the air. This story traps your mind and soul and the only thing wrong with the book is that you just can’t put it down .this is a must-read for all those who are a big Potter head and should definitely read it .so I recommend this book to all those who want to get mesmerized and lost in the magical world . HAPPY READING TO YOU!

Some Unanswered Questions of Harry Potter and the Chamber of secrets

Q1. Why didn’t Dumbledore himself went down to the Chamber of Secrets to save Harry?

Ans- Dumbledore didn’t know where the Chamber of Secrets was located, or how to enter it. He was clever, but in this case, Harry had a big advantage that made him solve the mystery first: he was a pursed mouth, who could hear and understand the basilisk’s “voice” in the pipes. Dumbledore might have known some parseltongue*, but he wasn’t a natural purse mouth like Harry. To him, and almost everyone else, the “voice” would sound like hissing that might as well be a wind outside the castle, but to Harry, it sounded like ordinary English.
That’s why he never went down the Chamber himself before Harry did.

Ans- At Flourish and Blotts, Lucius Malfoy dropped the diary in Ginny’s bag of books and this is how ginny came across that diary.

Q3. Why didn’t Hogwarts faculty find the Chamber of Secrets?

Ans- The chamber of secrets was created by Salazaar Slytherin before he left Hogwarts where he kept a Basilisk which could only be commanded in Parsletongue.

I doubt after so many years the teachers even truly believed if the Chamber even exists and didn’t really think of checking the underground sewage or pipes. Everyone thought the Chamber would be an..well actual chamber. Also once Slytherin left the attacks only started when Voldemort came to school and discovered his heritage and realized he too can talk in Parsletongue.

The Chamber could only be accessed by a Parcel mouth and the monster too would only obey the true Heir of Slytherin. I doubt any of the staff or faculty met any of these criteria and overtime just considered the Chamber of Secrets as one of those myths without any backing or proof of its existence.
The Chamber of Secrets was opened by Ginny Weasley, on the command of Tom Riddle aka Voldemort.

Q4. Why was the Chamber of Secrets opened?

In Harry’s second year, before the start of term, Harry and the Weasley family went to Diagon alley, to buy books. They entered Flourish and Blotts, where they confronted Lucius Malfoy.

Now Malfoy had a diary, which he tried to sell to Borgin&Burkes….because the diary was a dark object, and he had to save himself from continuous ministry raids.

Now on the book store, a fight occurred between Lucius and Arthur…and Lucius accidentally slipped the diary in the cauldron of the youngest Weasley child, Ginny.

Ginny found it after going home and saw that the diary has never been filled in. So she started to write in it, and miraculously, incredulously, the diary replied her back. She was thrilled, and gradually she started to make a new pocket-friend…the diary.

She told it everything, every small detail and secret she had, to the diary. Knowing all this, the diary became stronger, as she “spilled her soul” on it. So it gradually starts to use them against her, as a weapon.

Now the diary was a Horcrux, made by Tom Riddle, and Riddle enclosed a part of his own soul inside it, which became stronger, feeding on the soul of Ginny.

Now term began, and the soul(diary; all are same), knew that Ginny is in Hogwarts. So it implanted a bit of “it’s soul” inside Ginny, thus being able to control her.

Now Tom Riddle had already opened the chamber 50 years ago, as he was the heir of Slytherin, and he had to unleash the horrific monster(a basilisk), on every muggle-born wizard or witch. So the soul, which belonged to Riddle, decided that it was the time, to repeat history once more. So Ginny went to the abandoned bathroom, spoke parseltongue(the soul inside her), and brought the Slytherin monster once again in the open.