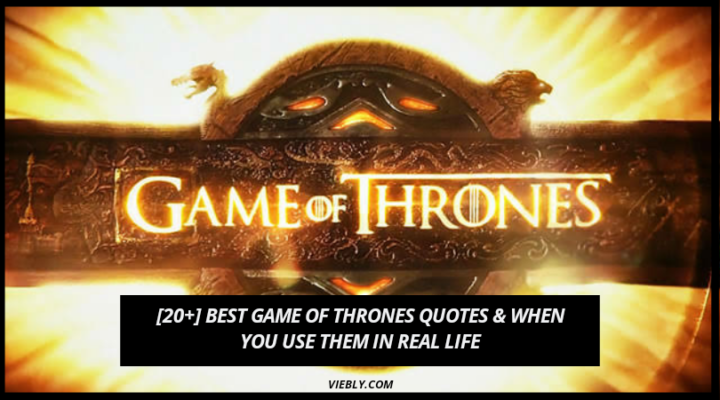 If Someone asks me about the short review of the Game of Thrones series, I would say- unexpected twists, bloodbaths, battles, love, and power-packed dialogues – that’s what ‘Game Of Thrones’ is all about!

What keeps the audience glued to the cinematic extravaganza of this television show is not only the unpredictable plot but also the witty best Game of Thrones quotes and dialogues. May it be books or the TV Shows, “Game of Thrones” has some really cool quotes penned down by the mastermind, George RR Martin. Some of these Game of Thrones quotes can be really useful when dealing with day-to-day situations and some cringe-worthy people.

The best Game of Thrones quotes has entered our everyday vernacular for a reason. The Game Of Thrones quotes is not geek-speak. George R. R. Martin has written lines that are used by everyone—between best friends and in boardroom meetings from Washington to Wagga Wagga.

Also Read: “I drink and I know things”: 30+ Best Tyrion Lannister Quotes That Make Him The Most Likeable Character from Games of Thrones

Game Of Thrones Quotes are so wonderful because they’re so sharp, so precise – like Tyrion’s wit. (Btw, if you are a Tyrion fan you’ve got to check out this book of quotes: Wit & Wisdom Of Tyrion Lannister By George R.R Martin).

20+ Most Memorable Best Game Of Thrones Quotes And Dialogues

1. “Winter is coming.” — Ned Stark / Jon Snow and just about everybody

When to use it? When the sh*t is about to hit the fan. Or in Autumn.

When to use it? WHEN PEOPLE DOUBT YOUR CAPABILITY.

3. “You know nothing Jon Snow.”— Ygritte

When to use it? When you’re arguing with your girlfriend/ boyfriend.

4. “The things I do for love.” -Jaime Lannister

When to use it? WHEN YOU SKIP THE SOCCER MATCH FOR YOUR PARTNER.

5. “That’s the only time he can be brave,” his father told him. — Bran and Ned Stark

When to use it? Just before bungee jumping, parachuting or anything else that scares you witless.

When to use it? When you’re planning a military coup.

When to use it? Think of this quote before you troll someone.

8. “Everything before the word ‘but’ is horseshit.” — Jon Snow

When to use it? Letting someone know to stop basking in the sound of their own voice and get to the point.

9. “A lion doesn’t concern himself with the opinions of a sheep.” — Tywin Lannister

When to use it? When you’re being criticized for taking a risk.

When to use it? TO THAT FRIEND WHO’S VERY MUCH KEEN ON KEEPING EVERYTHING IN ORDER.

11. “The man who passes the sentence should swing the sword.” -Ned Stark

When you use it? WHEN YOU’RE ASKED TO PURCHASE THE GROCERIES?

12. “If you ever call me sister again, I’ll have you strangled in your sleep.” -Cersei

When you use it? GIRLS, THIS ONE’S FOR THE GUY WHO FRIEND-ZONES YOU.

When to use it? When Kanye gets too ahead of himself.

14.“A ruler who kills those devoted to her is not a ruler who inspires devotion.” — Tyrion Lannister

When to use it? Wisdom for the bully boss.

15.“Power resides where men believe it resides. It’s a trick, a shadow on the wall. And a very small man can cast a very large shadow.” — Lord Varys

When to use it? When you’re impersonating Tony Robbins.

16.“When you play the game of thrones, you win or you die.” — Cersei Lannister

When to use it? When you roll the dice at the start of any board-game.

17.“Never forget what you are. The rest of the world will not. Wear it like armour, and it can never be used to hurt you.” — Tyrion Lannister

When to use it? When you’re embarrassed about something superficial.

18. “A Dothraki wedding without at least three deaths is considered a dull affair.” -Magister Illyrio

When you use it? IN A BORING WEDDING SESSION.

19.“No need to seize the last word, Lord Baelish. I’ll assume it was something clever.” — Sansa Stark

When to use it? Save it for the smarta** who always tries to get in the last word.

20.“The world is overflowing with horrible things, but they’re all a tray of cakes next to death.” — Olenna Tyrell

When to use it? When someone is whining.

When to use it? One to teach Grandma or Grandpa.

22. “The lone wolf dies but the pack survives.” – Sansa Stark

When to use it? When one of your freinds leaves the friend group.

23. “A mind needs books like a sword needs a whetstone.” – Tyrion Lannister

When to use it? When someone pokes you on staying in the library for hours.

When to Use it? When they call out the nerd girl (and she beats the crap out of them)

25. “I’m not going to stop the wheel. I’m going to break the wheel.”- Daenerys Targaryen

When to Use it? When they call you a weakling.

When to Use it? When you know that you can’t skip the test.

27. “If you think this has a happy ending, you haven’t been paying attention.” – Ramsay

When to use it? Well any day, when you think about life

When to Use it? When you have a test tomorrow and you haven’t prepared

When to Use it? – When you are drunk and still remember things.

When to Use it? when you don’t want to do your sibling’s work.